Is Your Gut Causing Thyroid Issues?

I am often asked about the connection between the gut and the thyroid. Thyroid issues seem to be more common these days and even if people cannot get a definitive diagnosis from an MD, they often still present with the symptoms. Could gut health be the cause?

It is so frustrating when you just do not feel like yourself. You are tired all the time, you gain weight easily , you can’t poop and maybe you are even depressed. When the medical tests say nothing is wrong,  you feel even worse. After all, how do you correct a problem when you do not know the cause.

When thyroid tests are performed by an MD, they usually test for TSH and/or T4. TSH is the hormone secreted by the pituitary and it tells the thyroid to start making T4 and T3. T4 is an inactive thyroid hormone and must convert to the active T3 in order for us to have proper thyroid function and a good metabolism. Without measuring T3 levels, a test will not determine thyroid function. There is another thyroid chemical known as rT3 (reverse T3) which can suppress T3 activity. Standard tests do not test for rT3 either.

Just 20% of T4 is converted to T3 in the thyroid itself. The rest is converted elsewhere in the body such as the liver, kidneys and the muscles. This makes sense since you need thyroid hormones to help with many functions throughout the body. But this also will mean that problems in other areas of the body can affect thyroid function. 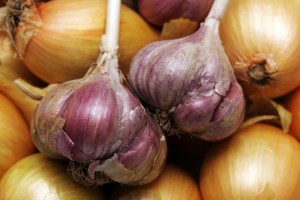 Pile of garlic and onion

It also turns out that our gut bacteria play a role, too. Good gut bacteria produce an enzyme called intestinal sulfatase which helps the conversion of T4 to T3 and 20% of all our T3 is produced in the gut. Insufficient levels of good bacteria will mean there is less production of the enzyme and therefore, less conversion to the active T3.

Intestinal bacteria need the mineral sulfur, either in the form found in the diet (garlic, onions) or from supplements such as MSM, for many activities including producing intestinal sulfatase. Bad bacteria, if not inhibited sufficiently by good bacteria, can steal sulfur to produce hydrogen sulfide, a gas that has been implicated, but not definitively proven, to be linked to inflammation in the intestinal tract.

And there is more. In a recent study, researchers wanted to see how endotoxins such as LPS (lipopolysaccharide), which are found, and subsequently released, by bad bacteria into the gut and body, affect thyroid hormones. Eighteen people were injected with an endotoxin to observe the effect on TSH and T4. Although TSH levels were not affected, T4 levels decreased.

Therefore, dysbiosis, where we have a poor good bacteria to bad bacteria ratio, has three ways to interfere with active thyroid hormone conversion.

Other hormone relationships are implicated in thyroid such as cortisol and insulin and these hormones are also require proper gut function. It’s all very complicated and we still have much more to learn but supporting the gut can start now.

Probiotic can be helpful to gut function overall with specific strains such as L. reuteri potentially showing a benefit for the thyroid. Prebiotics foods will also increase the number of our own residential strains, which can inhibit the effect of bad bacteria. There also many other vitamins, minerals and phytonutrients as well as supplements that will help repair the intestines and get rid of dysbiosis as well. Improving the diet and finding some key supplements may show some surprising benefits for the thyroid.

There may be some trial and error to find the right mix that works, but it is worth it.