How Mean Can You Be To Your Kefir Grains?

So, what happens when you do not feed them? Now, I swear I did not do this on purpose.  I had been making cow milk kefir every two weeks for months. This is what I feed my cats to support their gut health and sometimes I feed myself. I ferment the grains in fresh milk for 48 hours. I strain out the grains and store them in about 1/4 cup of milk for two weeks until it is time to make the next batch.

But sometimes I am lazy. Sometime I do not feel like straining out the grains so I will throw the jar of kefir in the fridge with the grains still inside and maybe strain them out a few days later.

Well last July I made a batch of kefir and put it in the fridge with the grains still inside and a few days became nine months. That’s right, I left my amazing kefir grains in the fridge for nine months, giving them no new food at all and totally neglecting them. They made their way to the back of the fridge where I could not see them. Out of sight, out of mind.

Every now and then I would remember they were there and a twinge of guilt would wash over me. But somehow I was not compelled to rescue them.

Finally, this month, I decided to see what had happened to them. I expected to see some poor moldy version of what was once my beautiful kefir grains.

What I found is what is pictured here. As you can see there is no mold and it just looks like kefir. The whey is separating out of the kefir a bit but that is normal when kefir sits without being stirred for awhile. When I opened it up, it also smelled like kefir – very strong kefir but definitely kefir.

First of all, lets take a minute to admire the amazingness of the synergistic combination of good bacteria and yeast that nature has given us. They kept this mixture from molding and rotting for nine months and who knows how much longer they could have kept going. We really need to respect the power of these beneficial organisms and their potential for what they can do for us.

It is no wonder that kefir grains are stars in the fermented world.

But the big question for me is what had I done to them? They must still be alive since the kefir was not rotten. But maybe they were just barely alive. Maybe they were circling the drain and if I had left them much longer I would, indeed, have killed them. 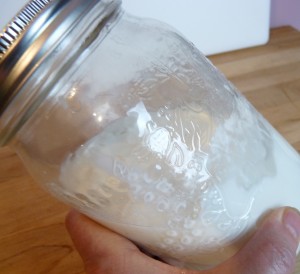 And if they were near death, could they come back. Could they still make kefir?

I strained out the grains and put them in fresh milk. They were left to ferment for 48 hours. At that point, I took a look. It was not kefir. It had thickened a little but not as much as it should have.  I left them for another 24 hours and presto, I had kefir.

So, while they may have been wounded, it only took one extra day for them to recover. And that is pretty amazing. If only we could recover that fast.

And what did I do with this jar of kefir? I put the jar back into the fridge with the grains and they have been sitting there now for two weeks. But I swear I will not leave them for 9 months this time.