Once again, I find myself writing about a food I do not like. However, if you like blue cheese, then you will happy to know there are some really great benefits to these different types of “flavourful” and “aromatic” cheeses.

There are many strains of mold in our environment and most of them are not problematic. There a few strains that that can cause respiratory reactions and other symptoms because they produce strong chemicals known as aflatoxins and mycotoixns and our bodies do not like these. Many allergic reactions are due to these toxins and in some cases, cause anaphylactic reactions.

This is what happens with the poor old peanut (and I do mean old). Old peanuts contain more mold spores, and are more prone to causing reactions in people with allergies.

However, the mold strains use to make blue cheese cannot produce these toxins. There are two key strains of mold that are used in making blue cheese: Penicillium Roqueforti and Penicillium Glaucum. Due to a combination of factors such as moisture, temperature, acidity, oxygen, and salt, these strains exist far outside the environment needed to also grow the mold strains that can produce the toxins.

Although molds have received a bad rap, they actually help contribute to the better diversity of microorganisms that we need in our gut. 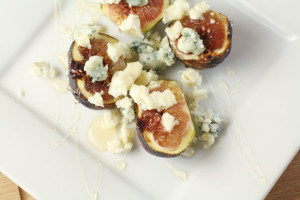 So what are the benefits?

Roquefort is the one that has been studied the most. It is being credited as another factor in the “French Paradox” which involves the lower heart disease statistics in France, despite a diet high in fat and alcohol.

Roquefort contains a protein that has been shown to inhibit a strain of Chlamydia pneumoniae that has been linked to the development of heart disease.

It has also been shown to be anti-inflammatory, another factor that can lead to heart disease and may be helpful for inhibiting joint destruction and may help prevent arthritis.

Bad bacteria such a E coli produces LPS (lipopolysaccharides) a type of toxin it uses to protect itself from harsh conditions including antibiotics. LPS plays a role in autoimmunity and other immune-related functions, brain and nervous system issues and stimulates inflammation in the body. Roquefort helps lower LPS

Now what is true of other blue cheeses, we can’t say until more research is done but since they all come from a historical tradition and we know that our ancestors produced foods that have many benefits we are just recognizing now, I think we will discover they probably all have benefits. More importantly, what we do know is they are not harmful.

So if blue cheese is your thing, try this recipe I found on Macheesmo.com. This even sounds yummy even to me. Just be sure to use raw honey for even more gut health benefit.

Figs with Blue Cheese and Honey