Schizandra: One Food, So Many Benefits

As many of you know, and for those who don’t, I am a big fan of a berry known as Schizandra (also spelled Schisandra). It is typically used in Traditional Chinese Medicine (TCM) but has become popular in Russia and Japan. I took it for many years and give it credit for many things. In the May CAHN-Pro professional newsletter, I re-printed a research article by Steven Foster, who called it “a rising star”, describing all its numerous benefits. So it is with great frustration, that I tell you the difficulties this wonderful berry has had staying on the market and why I think we should start a schizandra revolution.

First, let me tell you how wonderful it is.

In China it is known as a five-flavor fruit,” because it contains the flavours sweet, sour, salty, bitter and pungent which, in TCM, all represent various health properties. This may also explain its funky taste. 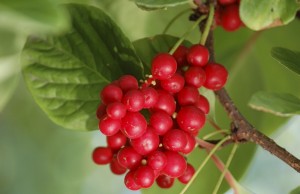 Research has confirmed that compounds found in the berries, called schisandrins, help with supporting nervous system issues, liver issues and coughs. Much of this research, which includes controlled clinical studies with humans, is in China, unfortunately.

Even more specifically, with regard to supporting the nervous system, animal studies have found that schizandra can counter the stimulating effect of caffeine. This supports what I have personally found with clients who wish to stop drinking coffee. Taking schizandra, while either cutting down on coffee or going cold turkey, lessens the nervous, shaky and anxious symptoms that come with withdrawal. It also helps keep the blood sugar stable and lessens the severity of the headache that always accompanies caffeine withdrawal. For this reason alone, we should be pumping it into the water. It would certainly eliminate road rage and sidewalk rage which we now apparently have to contend with, and every other kind of rage.

It further supports the nervous system by supporting the adrenals. It is a known adrenal adaptagen, making it a perfect food to support the body during times of stress.

As for the liver, schizandra can protect it from toxic substances in a similar manner to milk thistle, the most well-known liver protective supplement. It may be helpful in the recovery from hepatitis and acts as an antioxidant and anti-inflammatory to help protect the liver. One double-blind placebo study looked at 12 racehorses, all of similar age, weight, temperament and training and all with high liver enzymes and low performance issues. After fourteen days, the horses on schizandra, had lower liver enzymes in comparison to the placebo. Fifty percent of the horses on schizandra also had improved appearance and performance. And while we are not race horses, we certainly often conduct our lives like we are so some schizandra could really help us with our performance issues.

Digestively, it may be helpful for proper peristalsis (gastric muscle contractions), stress-induced gastric ulcers and regulating stomach acid. It can also help with diarrhea.

But for many of us, the number one benefit for schizandra may be the research that states it has anti-aging properties. This would include the fact that it has antioxidant and anti-inflammatory abilities, two important elements in preventing age-associated issues.  Studies have also shown it may help with age-related memory loss, and act as a tonic for the heart. It can supply us with more energy, help with depression and help support the immune system. And finally, for the vanity in all of us, schizandra may help our appearance by giving us a clearer complexion, improved skin elasticity and diminished the appearance of scars or wrinkles. Does it get any better than that?

So what is the issue? Getting a good source of the product is proving difficult. My favourite product from Nature’s Way has been held up by Health Canada for over two years while the company that distributes it jumps through hoops trying to get its NPN number for the product.  I did manage to get some from Amazon.ca that was shipped in from New Jersey but then someone warned me about supplements from Amazon – that sometimes they are not legit. Not sure if this is true and what I received is definitely schizandra as I know how it looks and tastes and how it affects me but I would prefer to just go to the health food store to buy it and not have to worry about what I am buying.

Then I came across a great product from St Francis, a Canadian company. It was a certified organic container of the berries, marketed as a tea. I had no sooner found it when I was told the company was discontinuing it. Now St Francis is still producing a schizandra tincture and this may be the easiest to find but the berries are so much more useful as they can be made in to a tea, added into smoothies or eaten as is. Now you can buy Schizandra berries from a Chinese herbal shop but we cannot know, for sure, that the source is clean so I would much prefer a certified organic source from a Canadian company. If you feel the same, feel free to contact St Francis: Contact link   and let them know there is a market for this product and that they just did not get the word out to the right people.

If buying a supplement, watch out for standardized extracts which I have also seen from time to time in stores. Although many science types might recommend this as the preferred version, a standardized extract is usually just one phytochemical found in a plant and does not represents all the chemicals found in the whole plant or in this case, the berry. There are 40 different phytochemical compounds in schizandra – there would have to be for it to do all the amazing things it is credited for. This is what we should be consuming – the whole berry – if we want to get the most from it. Nature’s Way and St Francis are using the whole berry. So is Kroeger Herbs.

If you do get the berries, the suggested amount for medicinal purposes is 1.5 to 6 grams. A rounded tsp is about 4 grams so a little goes a long way. If you want to make a tea, make what is known as a decoction. It is more potent. Make a big batch. Use at least two litres of water. Pour the water into a pot and bring it to a boil. Add 1 tsp of schizandra berries for every cup of water. That would be about 9-10 teaspoons for 2 litres of water. Cover and lower to simmer. Let it simmer for 45 minutes. Remove from the heat and let it steep for 15 minutes and strain.  Store in the refrigerator and drink 2-3 half cups a day. It will keep for about one week in the refrigerator and you can also freeze it, if you do a big batch. Please remember, I have not said that you would like the taste. It is not horrible but it is also not exactly tasty.