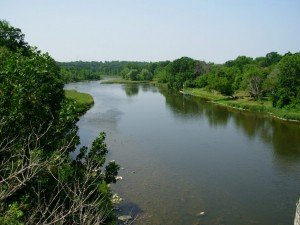 Good news! You no longer have to sweeten your coffee or tea to get the flavour you are looking for. Just use the water from the Grand River to make your beverage. Apparently it is so polluted with artificial sweeteners that scientists can use this fact to follow to the movement of treated waste in the region’s water supply.

The artificial sweeteners found were cyclamate (banned in North America), saccharin, sucralose (Splenda), and acesulfame (known as Ace-K). They all provide no calories, mainly because they are not broken down by the human digestive system. What is startling about this study is that the amounts found in the river were much higher than what has been found in other water systems in other parts of the world.

Twenty-three sites along the Grand River were part of the study conducted jointly by Environment Canada and the University of Waterloo. At one site, researchers calculated that the consumption would have to be 90,000 – 190, 000 cans of diet soda a day to account for the amount of acesulfame they found. The surrounding area is home to about 1,000,000 people.  The purpose of the study was to see if chemicals could be used to trace when human waste enters into the water system, both from treatment plants and from septic tanks where waste may be seeping into groundwater.

Now, you did read that correctly. They were not looking to see, or concerned with, how much we are polluting the water with all the artificial crap that is in our food and elsewhere. No, they were looking for chemicals that could be used to track human waste. Who knew pollution could have such a purpose. And I guess that is just a sign of the times where chemicals in the water are so normal, that scientists see them as helpers for determining other issues.

However, researchers did point that the long term effects to both human and aquatic life are “unknown”. This should at least be alarming to all of us as “unknown” health effects never turn out to be a good thing. So remember this information the next time someone makes fun of you for drinking bottle water or filtered water (hopefully re-mineralized eater if reverse osmosis). And think twice before using tap water for cooking or making tea and coffee.

More importantly, if you are someone who actually thinks diet soda is going to help you lose weight or prevent weight gain, then perhaps you need to really take a hard look at your thought processes.  Your body need nutrients and that includes those found in natural sweeteners. Pure honey, pure maple syrup, sucanat, coconut sweetener and palm sugar are all nutrient–dense and low glycemic. Providing the body with sufficient nutrients will provide steady energy, stable blood sugar, and prevent cravings which will do a lot more for proper weight management than any artificial sweetener could ever do.  And they taste a lot better than an artificial sweetener.